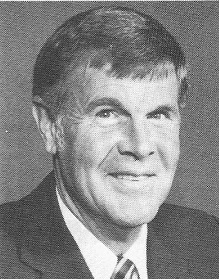 Biography: Bob Burson came to Illinois after a great prep career in football, basketball, and baseball at Lakewood High School in Ohio. He continued as a three-sporter at Northwestern University. Bob Burson never left Illinois except on assignment. For 28 years he served as a teacher and coach at Lyons Township High School. He served as a basketball official from 1956-1984. He became certified by the IHSA in 1962. Burson devoted 20 of those years to high school officiating. Burson officiated regional and district tournaments from 1962-1975, super-sectionals from 1970-1974. In 1972, in his first appearance in the Elite Eight at the Assembly Hall, Burson was chosen to call the championship game as the great Thornridge repeated as champion with a 104-69 defeat of Quincy. Burson also worked the Class AA Elite Eight in 1973 and 1974. From 1971 to 1982 this Western Springs resident served as a Big Ten official. In 1983 Burson was elevated to supervisor of Big Ten Officials.  Bob died on October 10, 2003.