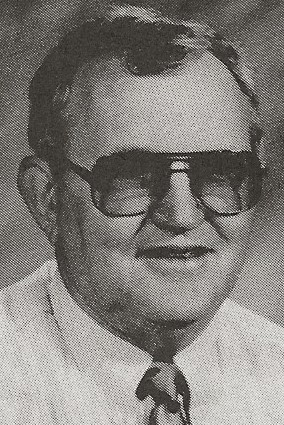 Biography:  William E. Dickson had an unusual sports background for becoming a top high school basketball official. Dickson built an illustrious career as a fast-pitch softball player. He played on a third-place national tourney finisher in Bloomington and Illinois state champions in Decatur and Monticello. From 1961-88, Dickson was a fixture at first base for the famed Aurora Sealmasters when they were regulars in the national tournament and won two titles.  A graduate of Lovington High School, Dickson earned degrees from Illinois State University and the University of Illinois before teaching at Farmer City, Monticello and Naperville. He served as a superintendent or assistant superintendent at Eola, Batavia, Yorkville, Manteno, Bourbonnais and Minong (Wis.).  Dickson began his career as an official in the early 1960s. He was instrumental in starting the South Central Basketball Officials Association in 1976 and served as president for six years. Dickson worked four District tournaments, 12 Class A regionals, three AA regionals, four A sectionals and three A supersectionals. He drew Class A state final assignments in 1974, where he called Lawrenceville’s thrilling 54-53 win over Ottawa Marquette in the title game, and 1975.  Dickson was forced to retire as an active official in 1978 because of a heart attack. He is a member of the American Softball Association of America Hall of Fame and was a volunteer assistant coach with the Illinois State softball program for nearly 20 years. William E. Dickson passed away in 2017 at the age of 85.