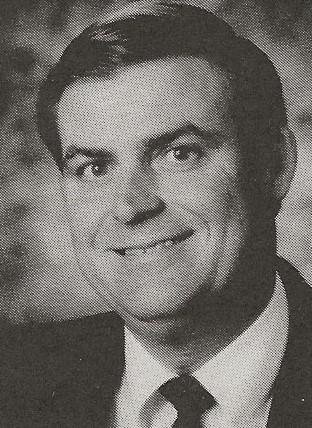 Biography: Scott Jones was a basketball and football official for 35 years. At the time of his induction in 2000, the Centralia attorney had officiated 12 Class A basketball regionals, 21 AA regionals, 14 AA sectionals, 7 AA supersectionals and the AA state finals in 1989, 1990 and 1994. He also worked numerous tournaments in Centralia, Belleville East, Salem, Carbondale, Sparta, Carmi, Mater Dei and Charleston, whistled 5 Kiel Shootouts in St. Louis and the IBCA All-Star Game.  On the junior college level, he did 8 Region 24 Division I championships and 4 Region 24 Division II championships. He called the 1998 and 1999 national NJCAA Division I tourney, including the title game in 1999, and the 2000 national NJCAA Division II tourney.  The Missouri Valley Conference added Jones to its officiating staff in 1997 and he also worked the Division II Great Lakes Valley Conference. On the junior college level, Jones worked the Great Rivers Athletic Conference and Collegiate Conference of Central Illinois.  He was the founder, past president and secretary of the Southern Illinois Basketball Officials Association and was one of the founders and president of the JUCO Officials Association.  Jones also served as the IHSA rules interpreter for the National Federation of State High School Associations for more than 20 years. He was a special mention all-state player at Centralia and joined his father Bob (who coached at Centralia, was a 1974 IBCA Hall of Fame inductee as a coach). Scott became a member of the Kaskaskia College Hall of Fame in 2011. Scott Jones died on September 3, 2006 at age of 51.