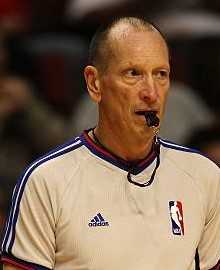 Biography:  Ron made his mark initially as an IHSA basketball official, reaching the 1987 IHSA Class AA State Finals in Champaign.  He also worked the Proviso West Tournament for 10 years, including the title game in 1982.  Ron moved on to a 21-year career as an NBA official, working at the sport's highest level from 1988-2009.