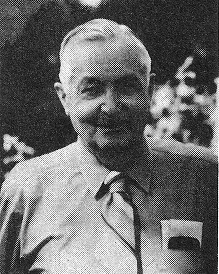 “Ike” Craig is a graduate of Illinois Wesleyan University who officiated for 42 years in high schools, colleges, the YMCA, and professional levels.  He started in the Bloomington YMCA for 25 cents a game.  He worked high school games in Illinois, Indiana and Wisconsin.  He worked for the Big Ten, the Missouri Valley, the Big Eight, the Southeastern Conference and the Sugar Bowl.  Ike also worked for 15 years at the NAIA Tournament in Kansas City and is a member of the Chicago Catholic League Hall of Fame.  Ike is a native of Gibson City.  At one time, Abe Saperstein tried to hire Ike to officiate for his team (The Harlem Globetrotters).  Ike Craig passed away on July 21, 1990.