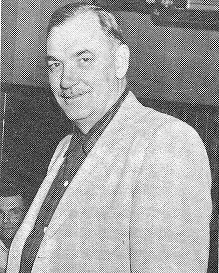 Ted Search, Sr. was one of the greatest officials in the Southern Illinois area.  Ted officiated high school basketball in Illinois for 25 years including the IHSA state finals in 1947 and 1948.  He was also a top college official during this period of time.  Ted served as an IHSA basketball rules interpreter for 20 years.  He was one of the officials selected to film a National Federation Rules movie used as a guide for interpretation meetings in all states in 1952.  The film was named “King Basketball;” filmed by Official Sports Films, Inc.  Sadly, Ted passed away at the age of 68 in 1971.