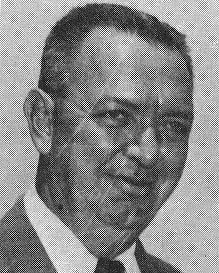 Ellis Veech was a long time prep and college basketball official.  He was highly respected a known throughout the state for his fairness and professionalism.  Ellis made sports a life-long love affair as he was the official score keeper for many years for both the St. Louis Cardinals and the old St. Louis Browns.  As a member of the Baseball Writers Association Rules Committee, he was one of five officials sent to Germany in 1946 to conduct a school for army officials.   Ellis was the editor of the East St. Louis Journal from 1935 to 1960.  He was a native of Bement and an alumnus of the University of Illinois.  Ellis passed away on October 24, 2011.