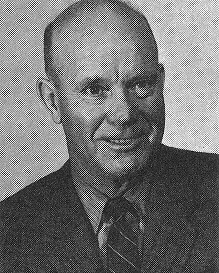 Dwight Wilkey was an excellent basketball official for 29 years (1935-1964).  He officiated the state tournament from 1955-1957.  Dwight also worked for 15 years in the Big Ten and worked the small college NCAA championships.  When not officiating, Dwight was an outstanding coach at Monticello Junior High where his teams compiled a 180-21 record.  He is a graduate of Monticello HS and the University of Illinois— he had transferred there from Illinois State University.  At the time of his induction in 1973, Dwight was retired as the superintendent of the Monticello Community School system.