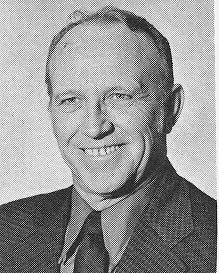 Biography:  Wayne Bollinger’s greatest thrill in a 24-year officiating career came when he worked the IHSA state tournaments in 1966, 1967, and 1971.  Wayne’s career began in 1947 and ended in December of 1971.  In that span he worked approximately 50 games a year.  In addition to the high school state tourney, Bollinger worked the junior high state tournament eight times along with holiday tourneys at Centralia and Carbondale.  Bollinger whistled other tournaments as well including Shawnee, McLeansboro, Anna, Pyramid, and Salem.  Wayne was a resident of Carterville and worked for the Department of Corrections, Juvenile Division.