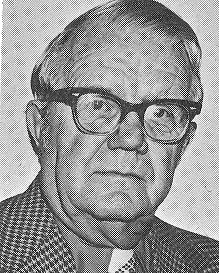 Biography: In 1923 Villa Grove became the smallest school to win the state title by defeating Rockford HS 32-29. This completed an outstanding 23-2 season. Bill Barmore established a single game record of 22 points. This record withstood the state’s finest for 27 years until Mount Vernon’s Max Hooper (HOF inductee in 1973) dropped in 36 during the 1950 game. Barmore was at his best in the championship games: scoring 10 against Urbana for the district title (16-9 win); 9 in nipping Mt. Pulaski for the section title in addition to the state title game. Barmore and his teammates played the entire tournament without substitution. Team captain, Bill was named as an All-State Player for his accomplishments. Of those scoring antics, Barmore modestly remembered that “the other players were more responsible for us getting to the finals, so the strategy was to let me shoot more and it worked”. Bill went on to play for the University of Illinois where he was a sophomore member of the final team (1924-25) to play in old Kenney Gym. He was also a member of the first team to play in Huff Gymnasium during his junior year.