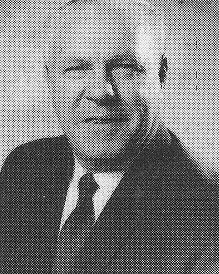 Biography: Ray Rex, the former Macon County Sheriff, was one of the most famous athletes in Decatur prep history.  In the days of four fouls before disqualification, Ray had three at halftime of the 1931 State Championship game against Galesburg with the Streaks leading 16-8.  Legendary Hall of Fame (1973) coach Gay Kintner made the decision to stay with Ray and he scored 4 of the team’s seven baskets for Decatur to take a 20-18 lead en route to their first state title, 30-26.  Ray was an outstanding all-around athlete, starring in football, track, and baseball as well as basketball.  At North Carolina State University, Ray earned 11 varsity letters, four each in his junior and senior years.  As a sophomore football player, he once returned an intercepted pass 103 yards for a school record that stood for many years.  The Atlanta Constitution said, “Rex looked like what you had in mind when you said athlete. . .he played everything legal on campus.”  Ray Rex died on March 17, 1976 and was inducted to the hall of fame posthumously.