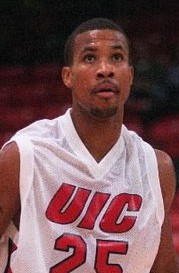 Biography: Bryant earned all-city honors as a junior at (Chicago) Simeon High School and was a 1st team Parade Magazine All-American player as a senior n 1994.  He finished as the runner-up for Illinois’ Mr. Basketball.  Bryant played in the All-Star Kentucky Derby Classic, scoring 24 points, before playing for The University of Illinois at Urbana from 1994-97.  He finished his collegiate career at The University of Illinois–Chicago in 1999.  Bryant played short stints for several NBA teams including the Grizzlies and Nuggets.  He played overseas for 8 seasons.