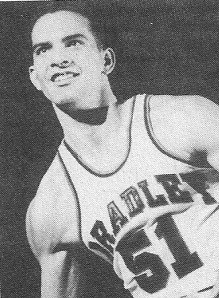 Biography: High school basketball fans in downstate Illinois shook their heads in bewilderment in 1950 when (Chicago) Von Steuben’s Harvey Babetch set a one-game scoring record of 87 points. It was no fluke as Babetch also set a two-game mark of 137 points. Three times selected to the All-Chicago Public League team, Babetch was a unanimous selection in 1950 when he also according all-state honors. In 1950, the Chicago Herald-American four times named Babetch to its prep cage team of the week.  Babetch ended his senior year with 343 points for a nine-game average of 38.1 and was a member of the Chicago area all-star team when it battled the Catholic League all-stars. Babetch furthered his career at Bradley University where he was the Braves’ leading scorer in the 1954-55 season with 491 points. He once held the Robertson Field House record with 31 points in a game and also a free throw mark at St. Louis of 18 in one game. In 1953, Babetch was named to the USA team in the Maccabiah Games, in 1954 he made the Pitt Bowl all-tourney team and the Sugar Bowl all-tourney team. In 1955 he was named to the first team Ukrainian All-America. He was a member of the traveling college stars on the Harlem Globetrotters series in 1955. Babetch was inducted into the Bradley University Hall of Fame in 1957.