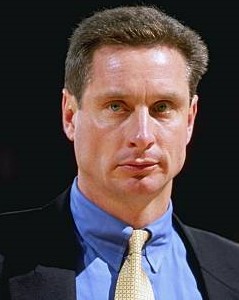 Biography:  Bob Bender enjoyed an outstanding high school career. As a freshman he led Quincy Catholic Boys (now Quincy Notre Dame) to the IHSA Class A state quarterfinals (57-56 loss to state champs Lawrenceville) and as a senior led Bloomington to its first IHSA Elite 8 appearance in 45 years. As a senior Bender averaged 22 points a game for a 26-5 Bloomington High School team. Although usually considered an outstanding defense player and passer, Bender did set the Bloomington school and Pontiac Holiday Tournament record of 50 points against Cairo. The Pontiac Tourney most valuable player was also a consensus all-state player and ended his Bloomington career as its No. 1 career scorer with 1,723 points. Ranked as the No. 1 point guard prospect in the nation, Bender was a second-team all-America choice by Parade Magazine and Basketball Weekly. Bender played in several major all-star games including the McDonald’s classic. Bender was a freshman player on Indiana’s 32-0 national championship team in 1978. Bender transferred to Duke University and in 1979, his first year with the Blue Devils, Bender help lead them to the NCAA finals where they lost to Kentucky 94-88. Bender became the first NCAA basketball player in history to play in the national championship game for two different teams. In his three Duke seasons Bender was a key force in two ACC titles and three trips to the NCAA Tournament. Duke was 73-24 with Bender and several times were rated No. 1 in the nation. As point guard Bender dished out 336 career assists, including 177 his senior year. After graduation he joined Duke’s Mike Krzyzewski as an assistant in 1983.  Later he was the head coach at Illinois State University and The University of Washington. Since 2002, Bob has been an assistant coach with several NBA teams including the Sixers and Grizzlies.