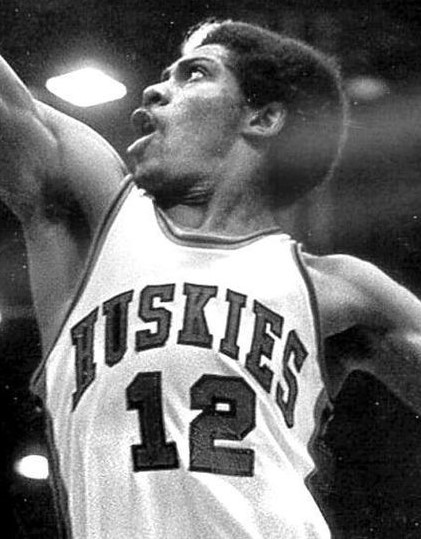 Biography:  Billy Harris’s sterling play at (Chicago) Dunbar High School (1965-69) earned him the moniker "Billy The Kid." As a prep star, Bill was his team’s MVP.  He earned All-city and All-State player honors while playing for the Mightymen. He then moved west to Northern Illinois University where he continued his outstanding play.  By the end of his Huskie career, Billy was the most prolific scoring guard in Northern Illinois history.  He completed his career as No. 3 on all-time NIU scoring list (1,331 points in 72 games and 18.2 ppg. average in 1970-73). He set the school mark for back-to-back scoring games (77 points) with 35 vs. Long Beach State in Madison Square Garden and career-high 42 vs. Virginia Commonweath (1972-73). Billy ranked No. 22 in NCAA Division I scoring with a 24.1 ppg avg earning First-Team Basketball Weekly All-District Four and Honorable Mention All-America on 17-8 club as senior. He was the no. 3 scorer (17.8 ppg.) on a 21-4 Hall of Fame unit that upset then No. 5 Indiana University.  He played on the USA AAU quintet in first World Games Basketball Festival in Peru (May, 1973). Billy was scouted personally by Boston Celtics' Red Auerbach. He ultimately was picked in the seventh round by Chicago Bulls (1973). He signed as a free agent with ABA San Diego Conquistadors (7.8 ppg. in 76 games in 1974-75). Bill was inducted into Chicago Public League Basketball Coaches Association in1994.  He was named on All-Time Chick Evans Field House (1997) and All-Century (2000) teams. and was inducted into the NIU Hall of Fame in 2001. Billy has been featured prominently in celebration of inner-city game at DuSable Museum of African American History and in the "Soul of the Game" display at The Field Museum in Chicago (1998).  Billy Harris died on January 3, 2010 at the age of 58.