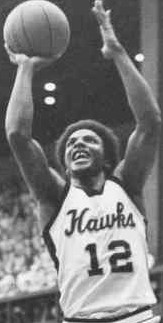 Biography: Ronnie Lester earned All-City and All-State honors at Dunbar in 1976. He went on to the University of Iowa, was an All-America pick in 1979 and started for 3 1-2 seasons before a devastating knee injury shortened his senior season.  Lester and the Hawkeyes were Big Ten champions in 1978-79. He was all-Big Ten Conference in 1978 and 1979. The 1980 Hawkeyes were the third team in school history to reach the Final Four despite Lester missing 16 regular-season games. He came back from the knee injury at the end of the season and averaged 13 points a game in the NCAA tourney as Iowa lost to eventual champion Louisville in the semifinals and fell to Purdue in the third-place game.  Lester is the Hawkeyes’ eighth-leading career scorer with 1,675 points and a 16.9 scoring average and is seventh in career assists with 480. His best scoring year was as a sophomore with 536 points. He is one of the few Iowa players to be named MVP three consecutive years (1978-80) and his uniform No. 12 is retired.  Lester was Portland’s first-round NBA draft choice in 1980 and he played for the Chicago Bulls and Los Angeles Lakers. He won an NBA World Championship with the Lakers in 1985 and became a scout and assistant General Manager in helping lead the way to seven more titles. He was a Suns scout from 2011-15.