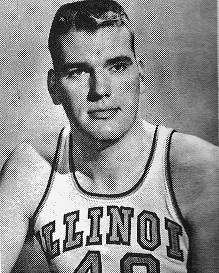 Dave Downey attended Canton HS where he earned all-state player honors during his junior and senior seasons.  He was voted MVP at the University of Illinois all three of his varsity seasons.  He was all Big Ten 1st team in 1963.  His 53 points against Indiana set the single game U of I record.  He won the Big Ten medal of honor for proficiency of academics in athletics.  Downey was elected to the Illinois Men's Basketball All Century Team in 2004.