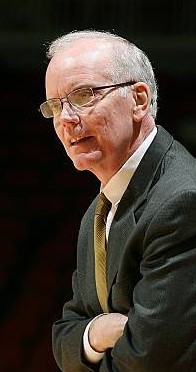 Biography: Joey was a key player for (Chicago) DePaul Academy and in 1967 helped lead his team to the Chicago Catholic League Championship, defeating Mt. Carmel.  His team then won the Chicago City Championship defeating Chicago Harlan 46-38.  Joey attended DePaul University and was captain of the 1970-71 DePaul Blue Demons Basketball Team, playing for his father, Coach Ray Meyer.  When he graduated in 1971, Joey Meyer was the fourth-leading scorer in school history.  He led DePaul in scoring his junior and senior seasons.  Joey scored 1,233 points and averaged 19.2 points per game his senior season.  He was also on DePaul’s list of best career free throw shooters (275-360, 76.3%).  In 2009, Joey Meyer was inducted into The Chicago Catholic League Hall of Fame as a player.  Joey is joined in the IBCA Hall of Fame by his father Ray Meyer(1974) and his brother, Tom Meyer (2000).