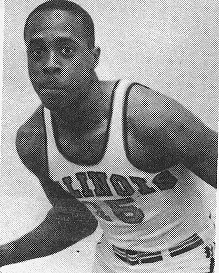 Don Freeman attended Madison High School and the University of Illinois. At Illinois, he scored 1449 points and averaged 20.1 points and 10.3 rebounds per game over his three varsity seasons. After finishing his college career as the most prolific scorer in Illinois history, he now ranks 12th all-time in Illinois scoring, and set a record for most points in a season (668), averaging 27.8 in 1965-66. He received first team All Big Ten and first team All-American honors that same season. In 2004, he was named to the University of Illinois' All Century Team.  He was selected by the Philadelphia 76ers in the third round of the 1966 NBA Draft.  Freeman never played for the Sixers; rather, he spent the first eight seasons of his career in the ABA, playing for the Minnesota Muskies, Miami Floridians, Texas/Dallas Chaparrals, Utah Stars, Indiana Pacers, and San Antonio Spurs. He scored 11,544 during his ABA career and appeared in five ABA All-Star Games. His point total ranks 7th all-time in the ABA. Freeman then joined the NBA's Los Angeles Lakers in 1975. He spent one season with that club, averaging 10.8 points per game before retiring in 1976.