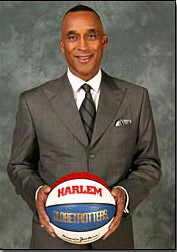 Mannie Jackson was an all-state player at Edwardsville HS, where he teamed with Govoner Vaughn to lead his team to a state runner-up trophy in 1956.  Mannie was a high school All-American who was selected as Illinois’ prep player of the year.  At the University of Illinois, he was an all Big 10 selection, captain of the squad and (along with his high school teammate, Govoner Vaughn), Mannie was the first African American letter winner for the U of I.  After college, he played in the ABL and with the Harlem Globetrotters.  In the mid 1990’s Mannie, already a successful businessman, became the owner of the Harlem Globetrotters.  In 2008, Mannie bought a building in Edwardsville in which he founded the Mannie Jackson Center for Humanities Foundation.