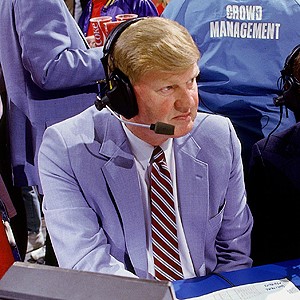 Johnny “Red” Kerr was one of the most respected and adored members of the Chicago sports community.  He began at Tilden Tech HS before moving on to the University of Illinois. There he was not only an All-American player in 1954 but also the Big Ten MVP.  After a successful playing career for the Syracuse Nats of the NBA that earned him Hall of Fame recognition, John became the head coach of the Chicago Bulls.  In 1967 John was the NBA Coach of the Year with the Bulls.  After spending some time in other capacities of the NBA, Johnny returned to Chicago and spent several decades as the radio and television voice of the Chicago Bulls.  John Kerr passed away on February 26, 2009.