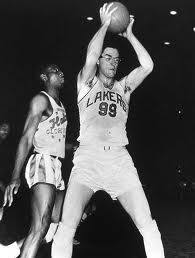 George Mikan was voted as the most outstanding basketball player of the first 50 years of the 1900’s.  As a high school student, George was dropped from his team due to a lack of talent.  Ray Meyer, the DePaul University coach worked with Mikan and he became a 2-time All-American player for the Chicago school and a perennial all pro selection with the Minneapolis Lakers.  George Mikan was the beginning of the big man in basketball.  While his records and accomplishments are too numerous to list, his name will always be mentioned with the best who ever played.  George passed away on June 1, 2005.