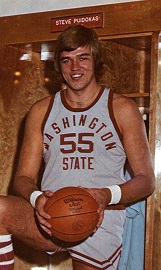 Steve was the Chicago Catholic League MVP in 1973 for (Burbank) St. Laurence High School. He was a third team All-American that season before accepting a scholarship to Washington State University.  Steve was a four-year starter at Washington State and as a sophomore led the Pac-12 in scoring and rebounding. He graduated as the Cougars’ career scoring and rebounding leader. He was inducted into the Washington State Hall of Fame and is the only WSU player to have his number retired.  Unfortunately, Steve died suddenly on August 12, 1994.