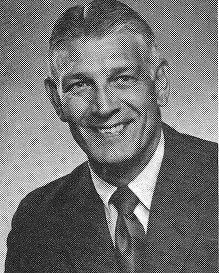 Biography: Gene Vance was an All State player from Clinton HS during the 1940 season.  He went on to the University of Illinois where he was one of the famed Illinois “Whiz Kids”.  Gene earned All Big Ten honors in 1942 and 1943.  He later returned to his alma mater as the athletic director of the Fighting Illini.  Gene Vance passed away on February 16, 2012, just a few days short of his 89th birthday.