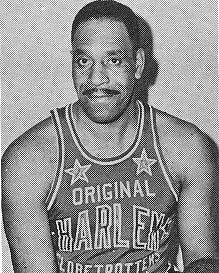 Biography: Nathaniel (Sweetwater) Clifton was one of the all time great big men in the game of basketball.  After playing at Chicago’s DuSable HS and Xavier University of New Orleans, Nat spent the majority of his career with the Harlem Globe Trotters where he was their center for nearly two decades.  Nat also spent time in the NBA with the Knicks and Pistons (Nat was the 1st African American to sign an NBA contract).  He was especially noted for his ballhandling and defensive work.  He was proud of his service in the US Army as a Sergeant during WWII.  Nat Clifton passed away on August 31, 1990.  In 2014, Nat was inducted into the Naismith Basketball Hall of Fame.