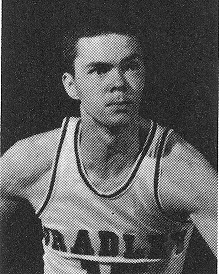 Biography:   Paul Unruh played his prep basketball at Toulon High School.  He then moved down to Peoria and led Bradley in scoring for all four of his playing years:  1947-1950 with a career total of 1,822 points.  At the time of his 1974 HOF induction, this was second only to Chet Walker in school history.  Paul was on all college All-American lists in 1949 and 1950.  He led all scorers in the 1949 NIT with 80 points for the tournament.  Paul was considered the fastest player of his era.  His incredible endurance allowed him to play every game with no signs of slowing.  Paul’s leadership allowed Bradley to be a team of national prominence in 1947-1950.  Paul was chosen for USA basketball but was then drafted into the army.  Therefore, he missed the gold medal opportunity at the 1952 Helsinki Olympic Games.  After his playing days, Paul stayed in Peoria as an insurance agency manager.