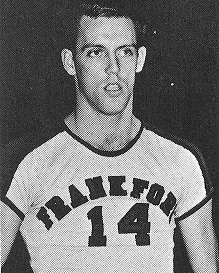 Biography: Bob Brown graduated from West Frankfort HS in 1962 after winning All-American recognition in both basketball and football.  Brown established a single game mark of 52 points in a game against Herrin in 1962.  At West Frankfort, Bob scored a career mark of 1610 points in three seasons and a single season mark of 733 points.  He also set the 12-game season mark for the South Seven Conference of 373 points.  Bob’s 52-point outburst is most remembered for the final eight minutes of the game when he tallied 29 of his total points for the night (a reminder to fans that this is long before the 3-point basket came into the game). That year, Bob was the state’s second leading scorer with a 29.9 ppg average.  After his playing career, Bob moved into coaching at Eldorado HS where his 1975 team finished 4th in the IHSA state finals. Bob Brown passed away on November 5, 2013.