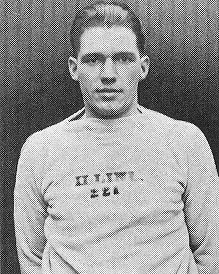 Schools / Organizations: The University of Illinois

Biography: Chuck Carney grew up in Chicago and was a great basketball player for the University of Illinois from 1920-22.  He was the first Illini to be named to the Helms Foundation Basketball Hall of Fame.  As a sophomore, he scored 188 points in 12 Big Ten games, a mark that stood until 1942.  Carney was the conference player of the year in 1922.  He was considered to be an excellent shot and he became the first Illini player to score 10 baskets in a single game.  A knee injury his junior year caused Carney to miss part of that season.  Chuck was a great all-around athlete who also excelled in football and was a three-year All-American player for Bob Zuppke’s squads.  He was the first Big Ten athlete to be named an All-American player in both football and basketball.  Chuck Carney passed away on September 5, 1984 at the age of 84.