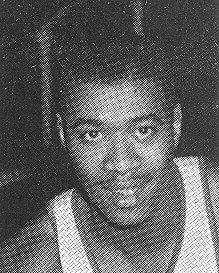 Biography: Shellie McMillon is another member of that famed (Chicago) DuSable High School basketball team of 1953-54.  He was the leading scorer and rebounder in the 1954 state tournament series.  While at Bradley University, McMillon earned third team All American honors.  He was on the Bradley team which won the NIT in 1957 and returned the following season only to be upset by Xavier.  Shellie played professionally with the Detroit Pistons and the St. Louis Hawks from 1958-1962, averaging 10 ppg and 11 rpg.  After his playing years, Shellie worked in sales and public relations for Proud magazine.  Shellie passed away on July 11, 1980.