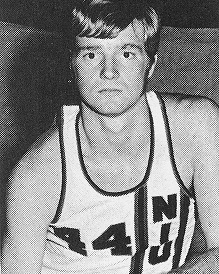 Biography:  Jerry Zielinski of Putnam County HS was a great shooter in every sense of the term.  His senior year, he made 311 of 444 attempts (70% success rate) as he scored 742 points.  “Zee” averaged 29.7 ppg that year becoming the all-time scoring leader at the Granville school with a final total of 1,736 points scored.  While also averaging 15.8 rpg, Jerry led the Panthers to a 66-8 career record.  After graduating from high school in 1968, Jerry attended Northern Illinois University where he became their career scoring leader with 1,402 points scored for a 19.2 ppg average in 73 games played (64 double figure games during that stretch).  One of his most impressive performances came against Indiana State in 1972 when he hit on 11 straight attempts.  He established many of the Huskie records.  Jerry chose a career of teaching, working in the Hinsdale high schools until his retirement in 2005.  He has been selected as a member of the Putnam County HS and NIU Halls of Fame.