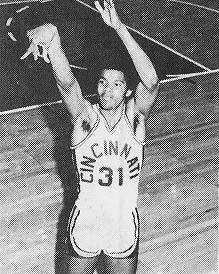 Biography:  Lloyd Batts ranks as one of the best basketball players ever produced at Thornton HS of Harvey.  His 50 points against (Calumet City) Thornton Fractional North High School set a school and regional record while his 48 points against (Oak Lawn) Richards High School was the record for the old South Suburban League. He scored 885 points to set the season record in 1969-70 and totaled 1601 points to establish his 55-game career mark.  An all-state player in 1969 and 1970, he was named to the Scholastic All-American Team in 1969-70.  At the University of Cincinnati, Batts became the school’s third highest scorer with a career mark of 1585 points.  His 20.1 ppg average was second only to Oscar Robertson at the time of Lloyd’s senior year. Note that Lloyd’s achievements came in the era before the 3-point line was a rule in the game. The MVP as both a junior and senior for the Bearcats, Lloyd played one year with the Virginia Squires of the ABA.  Lloyd earned 2 masters’ degrees and has been a teacher and coach in Chicago area schools since his playing career ended.