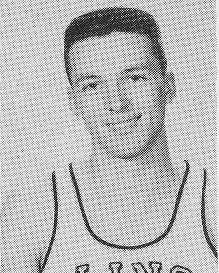 Biography: Jim Bredar was a standout basketball player at Salem High School, receiving statewide attention as a play-making guard.  For three seasons, Jim was a regular for the University of Illinois despite being only 5’10”.  He served as the Illini captain for the 1952-53 season when he was named as an all-Big Ten player and received honors as a 2nd team UPI All American.  As one of the finest guards of his era, Jim stayed at the university and served as the freshmen coach from 1957 to 1960 before moving to Owensboro, KY to further his career as a petroleum geologist.  Jim passed away on August 28, 1997.