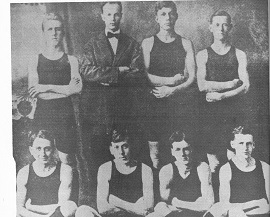 Biography:  The 1912 Batavia Team won the state championship in a thrilling contest over Galesburg HS at the Decatur YMCA. This team has been called “the team that made Batavia famous.” While this team was not big in size compared to modern day standards, they were the most highly competitive team of their day. After they won the state championship, they went on to tour and soundly defeated a group of college players. Batavia’s record during that championship season was 27-2.