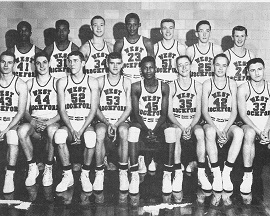 Biography:  West Rockford, coached by the crafty Alex Saudargas (IBCA Hall of Famer-1973), won their first of back-to-back state titles in 1955.  This great ball club was one of the first “big” teams to with the state title, led by their front line of Gentry and Wessells.  Although Nolden Gentry and John Wessells led the Warriors, they were backed by a great trio of Fred Boshelo, Rodney Coffman, and Rex Parker.  The team’s final record was 28-1.