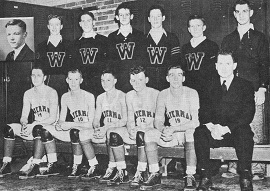 Biography:  Waterman High School was coached by Hall of Famer Joseph W. Hartley (1982 inductee).  This 1940-41 team was called the "Wonder Prep Quintet" of Northern Illinois.  With an enrollment of only 109 students, the Fliers played many larger schools.  Waterman only lost 3 games that year.  Their final loss was to eventual state champions (Cicero) Morton High School in the IHSA Quarterfinals.  They had beaten Morton earlier in the season.  The team was noted for its amazing shooting ability, for its composure, and for its great defens.  The team was led by all-state player Ken Marshall and Farwell Sawyer, the leading scorer of the team.  The final record for the Fliers was 28-3.