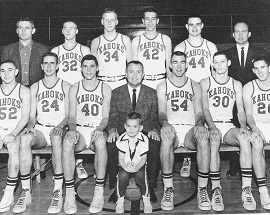 The Collinsville Kahoks were the undefeated 1961 IHSA State Champions at 32-0.  This Collinsville team was one of the truly great state champions in Illinois history.  They averaged 77 points per game while only allowing 55 points per game.  (Note:  This was prior to the three-point field goal being added to high school basketball.)  The 1961 Kahoks were the originators of the famous “Ball Press Defense” and were considered one of the best shooting teams of all time.