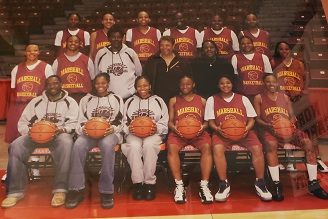 Biography:  The 2007-08 Marshall Lady Commandos finished the regular season with an impressive 19-7mark, but saved their best for last as they reeled off 7 straight wins in the post season, culminating with a Class 3A State Championship in the first year the IHSA moved from the 2-class system to the 4-class sytem. Marshall breezed through the Chicago Orr Regional, winning their two games by a combined score of 188-52. They also cruised through the River Forest Sectional and the Loyola University Super-Sectional, giving them a berth in the Final Four at Redbird Arena on the campus of Illinois State University. In the semi-final game, Quincy Notre Dame gave Marshall all they could handle as Marshall overcame a 37-31 deficit and needed overtime to take the 76-73 win. Adrienne Gobold was 11 of 13 from the field and led the team with 25 points. In the championship game, Marshall pulled away to the 58-47 win over Freeport. It was the school’s 17th state trophy in 33 years under Coach Dorothy Gaters.