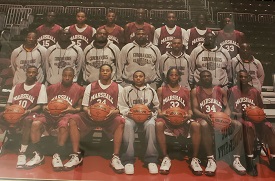 Biography:  The 2007-08 (Chicago) Marshall Commandos went into the post season with an impressive 24-4 record and a regular season that ended with a Chicago Public School Tournament championship. The Commandos began the post season by hosting and winning the IHSA 3A regional tournament. They also captured the Riverside-Brookfield Sectional, and moved on to the Super-Sectional where they scored an 84-54 win over North Chicago High School, giving them a berth in the first-ever 4-class IHSA state tournament in Peoria. In the final four, the Commandos overcame a 30-29 halftime deficit as they scored a 63-57 win over Washington High School. In the championship game, the Commandos put four players into double figures, becoming the state’s first ever IHSA Class 3-A champions as they topped their cross-town rival and defending state champion (Chicago) Simeon High School 69-61.  It was the third state championship for the boys’ program at Marshall but their first since the 1960 season.