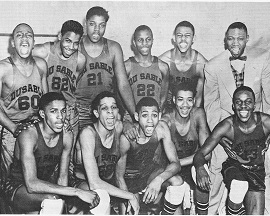 Biography:   (Chicago) DuSable HS.  The 1954 Panthers are considered by many to be the finest basketball team ever developed in the Chicago Public League.  They won 31 consecutive games before bowing to Mount Vernon 76-70 in the 1954 Illinois State Championship game.  DuSable pioneered the fast break, full court pressure, and pro socks in Illinois basketball history.  This team was the first Chicago team ever to compete in the Illinois State Championship Game.  The Panthers opened the door and paved the way for Championship runs of Marshall, Carver, and Hirsch.  They tore down racial barriers of select hotels, motels, and eateries that formerly denied accommodations to the African-American athletes in Illinois.