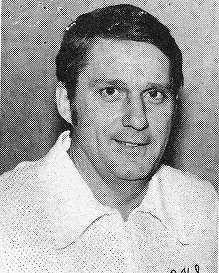 Biography: Sherrill Hanks was a World War II veteran and returned to his home city of Alton at age 22, where he attended Shurtleff College under the G.I. Bill. He started his coaching career there in 1953, posting a 47-11 record in three seasons. He then coached for five seasons at Alton High School, posting a 90-39 record.  It was in 1959 at Alton where he started a remarkable streak of 22 consecutive seasons of coaching a team to at least 20 victories. All 15 of his teams at QHS won at least 20 games, and his first five at Quincy College did so as well.  Only twice in 34 years did a Hanks-coached team suffer a losing season.

His Quincy High School teams set the IHSA record of 15 straight seasons of 20+ wins—6 teams in the State Tournament in the last 12 years.  Those teams won 2 second place trophies and 1 third place.  He is a past president of the Illinois Coaches Association and an organizer and founder of the Illinois Basketball Coaches Association.  He also served on the original board of directors for the Athletic Directors Association of Illinois.  He served on the National Coaches Convention Committee twice in Washington, D.C.