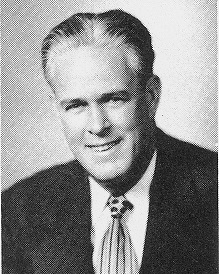 Biography: John J. Jordan played for Notre Dame University and was their captain during the 1934-35 season.  He then started his coaching career at (Chicago) Mt. Carmel HS.  There, he earned a reputation as one of the nation’s top prep coaches, capturing three catholic League Championships along with two City Championships in 1943 and 1946.  John then turned to collegiate coaching, going first to Loyola and then on to Notre Dame in 1951.  He had several outstanding seasons as many of his Notre Dame teams made the NCAA playoffs during a career that saw only two losing seasons.  Four of his squads made the NCAA quarter finals.  His teams captured the Sugar Bowl Classic (twice), the Hoosier Classic, and his 1957-58 team was an NIT runner-up.  John was the recipient of the New York sportswriter’s award as “Coach of the Year” in 1953-54.  John J. Jordan died on June 13, 1991.