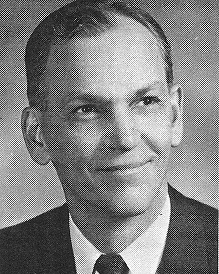 Biography: John Krafft left his head coaching job at Waterman HS in 1928 to become assistant heavyweight football and basketball coach at Elgin HS.  Krafft was elevated to the head role for the 1940-41 season.  He would hold this position for the next decade.  Under Krafft, Elgin posted a 178-48 record and claimed 4 Big Eight titles outright and shared 3 others with 2 second place finishes.  Six times Elgin would gain regional titles and make five trips to Champaign.  Elgin won at least one game in Champaign under Krafft during each visit except 1949.  Elgin was 4th in 1943, 3rd in 1950 and 2nd in 1944.  His 1948-49 team was top rated in both prep polls throughout the season.  John Krafft died in September, 1984.