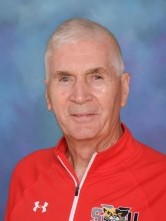 Biography: Thomas O’Malley coached basketball at (Chicago) Leo and Reavis High Schools for a combined 32 years.  His teams there posted a combined 474-326 record.  His lightweight team at Leo was Catholic League Champion in 1966 and his 1969 varsity club was South Section runner-up.  In 1973, Leo was Catholic League Champions and finished second in the National Catholic High School tournament.  He was named Catholic League Coach of the Year in 1966, 1969, and 1973.  At Reavis, O’Malley’s 1981 team ruled the SICA West Division.  He was named IBCA Coach of the Year in 1977.  Along the way, Tom has won many other awards for coaching including the prestigious Tony Lawless Award for outstanding efforts in all sports by the Catholic League, in 1973.  In 1997, Tom moved south to St. Xavier University.  His teams there made 13 NAIA tournament appearances and posted a 527-241 record in 23 seasons.  The Cougars won 20 games in 17 of Tom’s 23 seasons at the helm.  In his final career game to cap 55 straight years as a head high school or college coach, the win game Tom 1,000 victories for his amazing career.  Tom was inducted into the St. Xavier Athletic Hall of Fame in 2020.