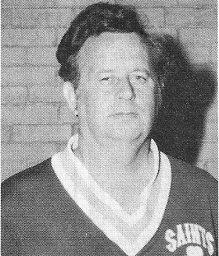 Biography: When he stepped down from coaching in 1997, John Snyder Sr. had served as varsity basketball coach of (Bloomington) Trinity High School and its successor (Bloomington) Central Catholic High School for 48 years.  His teams had won 16 IHSA Regionals. In one stretch, his teams won 10 regional titles in 11 years.  His teams had won 3 IHSA Sectional Crowns and 3 IHSA Super-sectional games.  His total career mark of 664 wins places John among the elite coaches in Illinois prep history.  Snyder has been IBCA Class A District Coach of the Year in 1976 and 1979. In 1979 Snyder was inducted into the Illinois State University Hall of Fame. Additionally, John served the school as head coach in football and baseball during his career.  John retired from teaching in 2010.