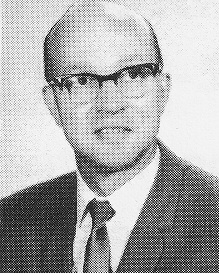 Biography:  Richard Kinneman still holds one of the most enviable coaching resumes in the state of Illinois. His teams at Chrisman High School, Westville High School, Arlington High School (junior varsity) and Prospect High School compiled for a 358-98 record. In 14 of his 16 varsity seasons, his teams won at least one championship. His teams never finished lower than second in the conference. He coached four conference champions at Chrisman, two at Westville, and five at Prospect. Along the way, holiday championships were won at Fenton, Kankakee, Geneva, St. Charles, and Pontiac. At the time Dick left each school, his teams held the best won-loss record in the school’s history. His best run was at Prospect where his 1959-60 and 1960-61 teams combined for a 48-4 record. Dick ended his career as coordinator of Physical Education and Athletics at Prospect HS. Richard passed away on August 17, 2017 at the age of 92.