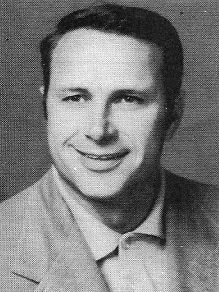 Biography:  Bob Kemp was head basketball coach for 19 of his 23 years in coaching and compiled a record of 276 wins and 184 losses. Kemp did stints at Wenona, Kankakee and Rockford Guilford High Schools. Among wins recorded by Kemp teams were an IHSA District Championship and four IHSA Regional Championships. Four times, Kemp’s teams made it to the IHSA Sectional Finals. Also included were five holiday tournament championships. In 13 seasons at Rockford Guilford, Kemp’s teams had a composite second place in the Big Nine Conference. For a number of years, Kemp joined Dolph Stanley in the operation of a basketball camp in Rockford which was one of the most widely attended in Northern Illinois. Kemp, as a player, competed at Wenona High School, Beloit College and for the Sixth Army Championship team in San Francisco.