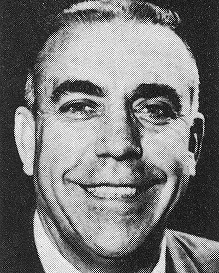 “One of the most dynamic basketball coaches in the game,” is the only way to describe Ernie Kivisto from East Aurora High School.  A developer of 27 All-State Players and seven high school All-American players, Coach Kivisto had a fantastic record of  545 wins and only 177 losses in 28 years of coaching (at the time of his 1973 hall of fame induction).  His teams have won numerous championships and have appeared in the Elite Eight six times.  A resident of Aurora, Ernie had three sons who became high school All Americans.  Ernie Kivisto passed away on February 5, 2003.