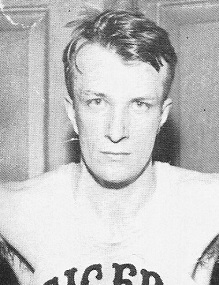 Biography:  Otto Kolar and his brother Eddie contributed greatly to making basketball as popular as it is in the Midwest. Otto and Eddie toured the Eastern United States with the famed House of David team from 1930-34. From 1935 to 1940 Otto played in the Midwest Pro League with Sheboygan and competed on a championship team. Otto and Eddie competed against prominent players of their era – Ray Meyer, John Wooden, Joe Lapchick, Tony Lawless, Jim Vopicka, and Bill Shay. Many of the teams the Kolars played against – New York Celtics, Jersey City Reds, Savoy Big Five, and Harlem Globe Trotters – are the forerunners of current NBA teams. Otto Kolar was known for his tough play.  He passed away on April 10, 1995.