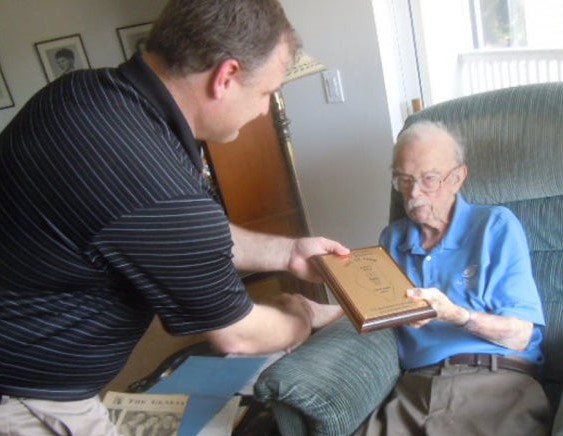 Biography:  Allen covered Geneva High School basketball for The Geneva Republican for 47 years from 1939-1986.  He graduated from Geneva in 1933 and earned his master's degree in journalism from the University of Wisconsin in 1939.  Allen took ownership of The Republican from his uncle, Cadwell Mead, in 1950.  He served as both editor and publisher of the newspaper until 1972 and continued as publisher and majority owner until 1986.  Allen was a strong supporter of Geneva sports, particularly basketball.  Pictured at the left is Allen receiving his IBCA Hall of Fame plaque from board member and then Geneva Boys' Basketball head coach, Phil Ralston.  Allen died shortly afterwards on September 30, 2012 at the age of 95.