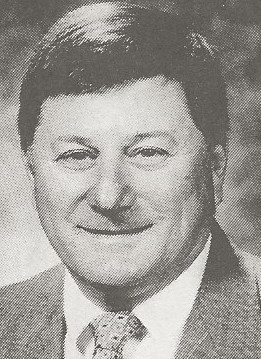 Biography:  The late Robert Emig’s support of high school basketball in the Metro-East area bordered on the fanatical. For more than 50 years Emig chased the sport.  Emig began a sportswriting career in 1965 as a correspondent for the Belleville News-Democrat. As a senior, he began a 13-year career with the Metro-East Journal based in East St. Louis. From 1975-89, Emig was the East Side correspondent for high school sports for KMOX radio in St. Louis. Emig filed reports, did interviews and reported scores two or three times a week on Illinois high schools.  For three years, Emig was a freelance sportswriter for the St. Louis Post-Dispatch. From 1994-99, Emig was a sports columnist for the Collinsville Herald and Suburban Journals.  For seven years Emig was a state director of competition for the Prairie State Games with duties to organize the elite scholastic (high school) and open (typically college) division teams. Emig spent five years as athletic director and four years as basketball coach for Saints Peter and Paul School in Collinsville.  Emig died on March 6,  2001 but his legacy lived on with the 2004 creation of the Bob Emig Foundation to support youth sports.